The search for extraterrestrial civilization usually focuses on the potential habitability of newly discovered exoplanets. However, the first contact of humanity may occur much closer to home. And although no planet in the solar system has a climate suitable for life, there is strong evidence that points to biological processes taking place on satellites.

Mars is about 225 million kilometers from Earth.

An alien civilization is the first association that occurs with Mars. There is even an assumption that the Red Planet will become the second home for earthlings. Research on rovers and orbiters confirms that Mars once had rivers, lakes, and possibly even oceans. That is, the planet was potentially inhabited, as evidenced by the fossilized remains of ancient life. However, solar wind and radiation robbed it of its atmosphere: the surface of Mars was irradiated and became dry and cold. Is there anything alive left on the Red Planet? There is no exact answer. Perhaps some form of life still exists in the thickness of the ancient ice, but to find out it will take more than one year of research. The large-scale study already began in February 2021, when the Perseverance rover landed on the planet to collect soil. And in 2022, the European Space Agency plans to launch the Rosalind Franklin lander to search for signs of life.

Europe – about 628.3 million kilometers from Earth 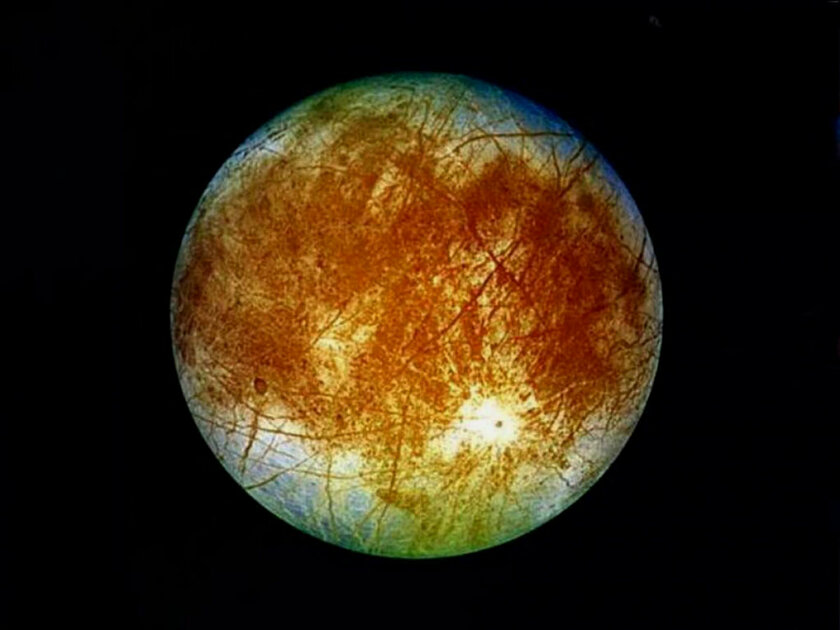 Europa is the smallest of Jupiter’s Galilean moons. It is believed to hide huge underground oceans, whose water contains chemical compounds associated with biological processes. Jupiter’s tidal forces heat the planet while keeping most of the oceans liquid. Such a process significantly increases the chances of the development of extraterrestrial life. According to NASA, the thickness of Europa’s ice shell is 15 to 25 km, and the depth of the underground ocean is from 60 to 150 km. It turns out that the satellite of Jupiter contains several times more water than Earth. In addition, like our planet, Europa has an iron core, rocky mantle, and salty oceans, and its icy surface can regularly replenish. Together with a tenuous atmosphere, these features indicate that Jupiter’s moon is one of the most attractive places to search for extraterrestrial life. NASA is currently planning a new mission to explore the mysteries of Europe.

Ganymede – about 628.3 million kilometers from Earth 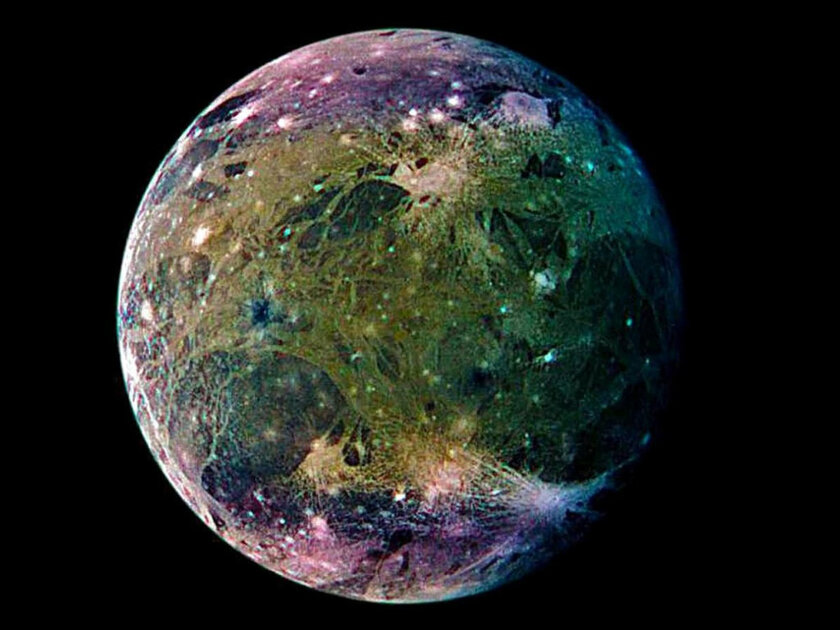 Ganymede is the only satellite in the solar system that has a magnetic field. The magnetosphere is a great advantage for the development of life, as the Sun emits radiation that can wreak havoc on an organic compound. Ganymede is a rather unusual body belonging to Jupiter since its magnetic field can create auroras with analogs on Earth. Presumably, layers of ice may be located between the surface and the iron core of the satellite, which provides additional protection. It is also believed that there is water in a liquid state under the ice crust since Jupiter’s tidal forces keep the required temperature on Ganymede. In addition, there were signs of a rise in water from under the ice crust, which is additional evidence of the presence of underground oceans on the satellite, which may be home to extraterrestrial life. However, many scientists are skeptical about this theory because due to the internal structure of the satellite, the pressure at the base is so great that the water immediately turns into ice.

YOU CAN ALSO READ:   How to enable Adobe Flash Player in Windows 10

Ceres – about 263.8 million kilometers from Earth 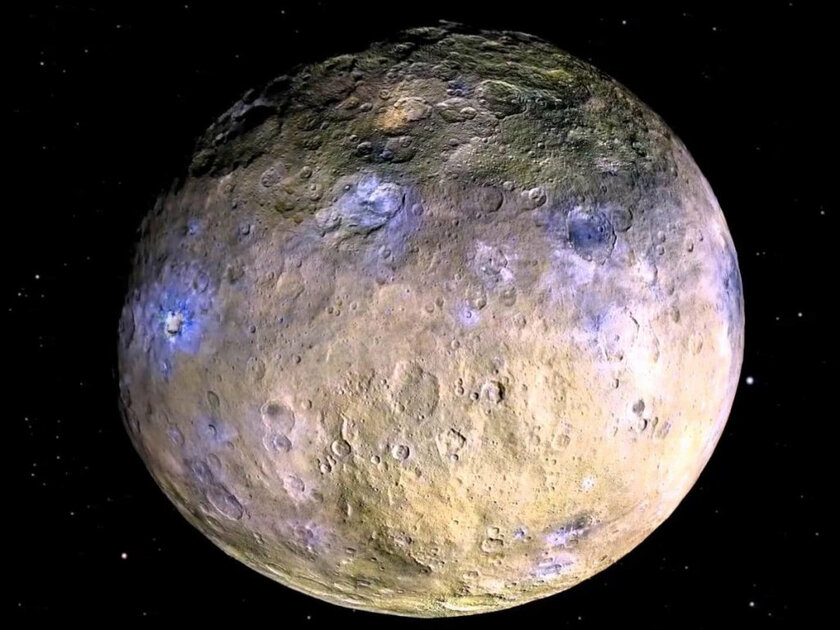 Ceres is the largest asteroid in the solar system and has been classified as a dwarf planet since 2006. It is believed that the cosmic body is 25% water, but it is not known exactly what state the liquid is in. Ceres has a fragile atmosphere that is created from water vapor. There are also ice volcanoes on the surface that spew ice and salt. There is a possibility that under the frozen crust of the asteroid, there is an underground ocean in which life can exist, but Ceres does not have a companion planet that would warm the inner world with the help of tidal forces. Therefore, the presence of organic compounds is unlikely. The last study of the dwarf planet was in 2015. Since that moment, new ideas have appeared regarding Ceres, which means that a new mission will happen shortly, which will help assess how much the asteroid is actually inhabited.

Callisto – about 628.3 million kilometers from Earth 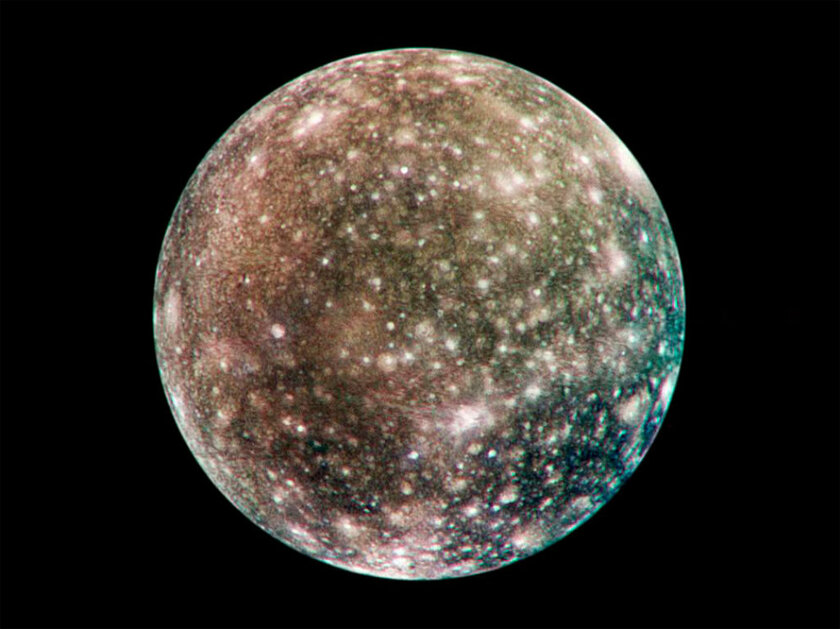 Callisto is the second-largest moon of Jupiter. It has the oldest surface in the solar system, which suggests little geological activity. The Galileo mission to Jupiter, which lasted from 1990 to 2000, showed an underground ocean under Callisto’s crust, the depth of which is 250 km. And the white dots on the satellite could be ice-covered craters. Callisto also has an atmosphere of carbon dioxide, hydrogen, and oxygen, making the satellite more hospitable to living organisms. The European Space Agency is preparing a mission that will focus on three moons of Jupiter, including Callisto. The launch of the program is scheduled for 2030.

YOU CAN ALSO READ:   2 Ways to Download Acer Drivers for Windows 10

Titan is about 1.2 billion kilometers from Earth. 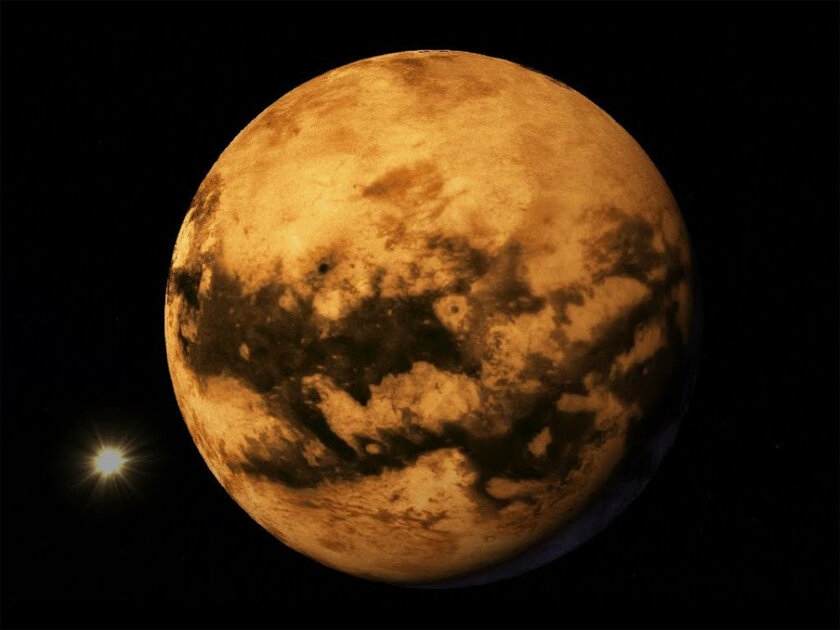 When it comes to spectacular objects in the solar system, Titan, the largest moon of Saturn, ranks first. It has unique qualities for the evolution of life as it has a dense, nitrogen-rich atmosphere. In addition, Titan is the only world besides the Earth that has active rivers, lakes, and seas on the surface. However, they are all created not from water but methane. Of course, there is a possibility that primitive life may exist in such an environment since the atmosphere promotes the formation of organic compounds. Still, it will take too many processes to maintain it. That is. First, the body will need to inhale hydrogen instead of oxygen, then metabolize it with acetylene instead of glucose, and as a result, exhale methane instead of carbon dioxide. The last data on Titan was obtained 13 years ago. A new mission, called Dragonfly, is scheduled for 2026: NASA will launch a helicopter drone that is supposed to study the potential suitability of the companion for life in detail.

Mimas – about 1.3 billion kilometers from Earth 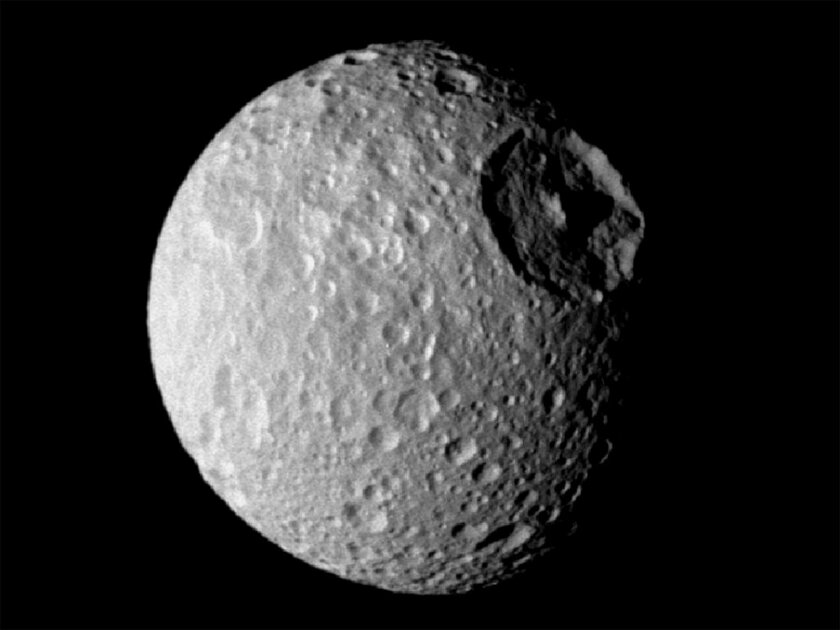 With a giant crater covering much of its surface, Saturn’s tiny moon Mimas resembles the actual Death Star from the Star Wars movie. However, the similarities are accidental. Mimas is so small that it was only possible to see the details on it with the help of the Voyager space probe in 1980 – three years after the blockbuster premiere. It is believed that there is an underground ocean underneath the cracked surface at a depth of 25 km, and the slightly elliptical orbit should cause more tidal heating inside. These are ideal conditions for the existence of various organisms. However, Mimas created a real puzzle for scientists since, most likely, the satellite is completely frozen inside. Research into the space body continues. So, since 2005, the Cassini probe has repeatedly photographed and studied Mimas. Most likely, new NASA missions will also be associated with the moons of Saturn.

Enceladus is about 1.3 billion kilometers from Earth. 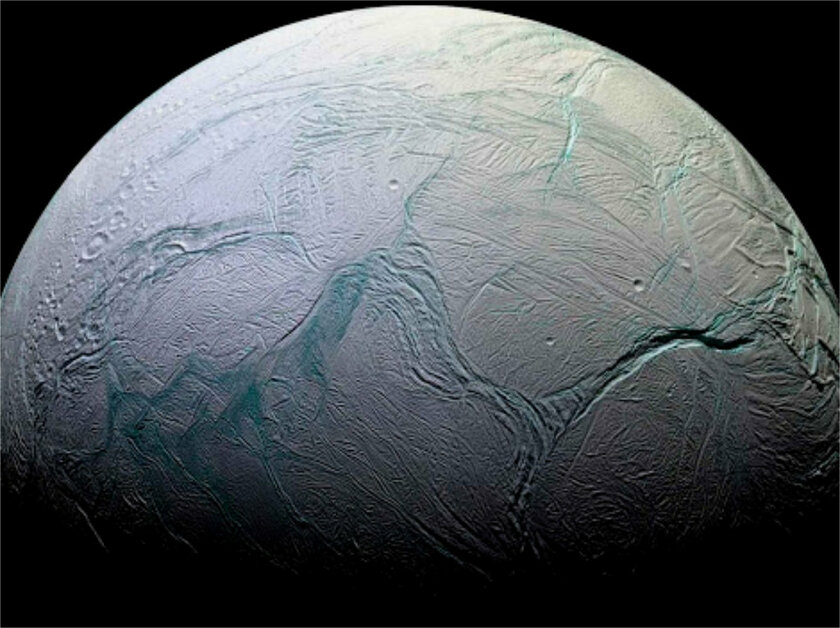 Saturn’s enigmatic moon Enceladus has received a lot of attention in recent years. Images from NASA’s Cassini spacecraft suggest extraterrestrial life may exist beneath the ice crust. In addition, the probe, which orbited Saturn, discovered a form of chemical energy on Enceladus that could be used to feed alien creatures. According to NASA, the distance from the bottom of the frozen crust to the boundary of the hot solid core is 30 km, and the diameter of the satellite itself is about 500 km. It should be noted that the dynamics of heating do not depend on the Sun: the satellite has a water circulation system that regulates the energy balance. This unique mechanism, along with its chemical composition, makes Enceladus a potential candidate for a place in which extraterrestrial life could exist.

YOU CAN ALSO READ:   Solved: No AMD Graphics Driver Installed in Windows 10

Triton is about 4.4 billion kilometers from Earth. 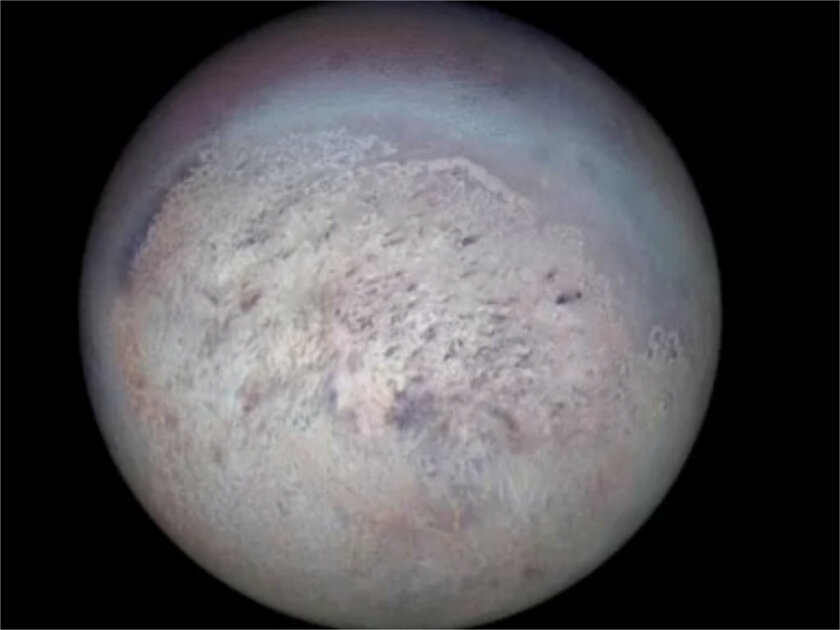 Triton is the seventh-largest satellite in the solar system. Neptune’s gravity captured it at some point in the past, and therefore its orbit is retrograde. That is, the satellite revolves around the planet in the opposite direction. It is still unknown if an ocean exists under its frozen crust, but cracks and volcanic features suggest it is heated by tidal heat from its planetary companion. This energy would be enough for life to appear, but given the low temperatures, the chances for biological organisms to develop are minimal. Triton is one of the coldest objects in the solar system, but its active geology suggests something intriguing is happening beneath its surface. What is this, scientists have yet to figure out.

Pluto is about 5 billion kilometers from Earth. 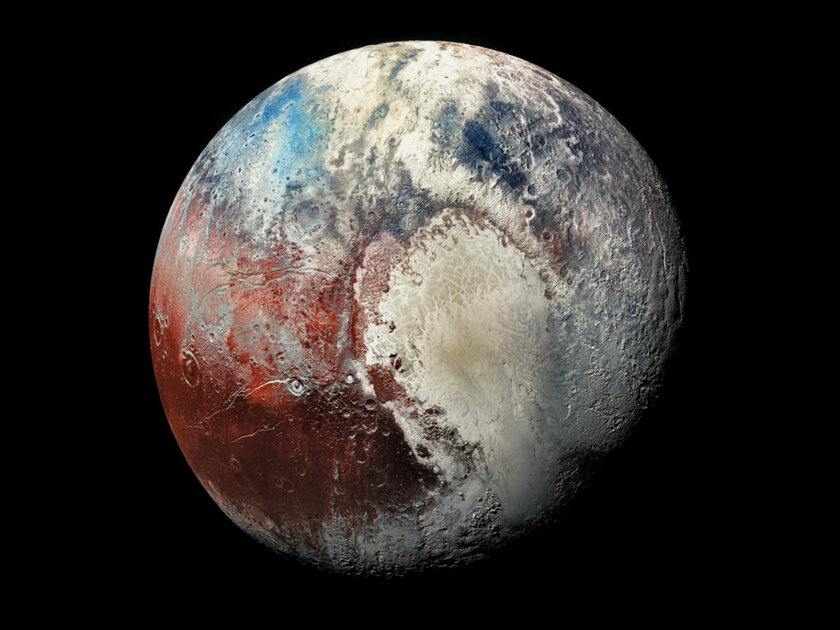 The dwarf planet is an ice ball, the surface of which is 98% frozen nitrogen, and the mountains are made of water ice. However, according to NASA, Pluto is the most eccentric and unexpectedly active object in the solar system. It displays a wide range of colors, from white to jet black. And its temperature inside was much higher than expected. This could mean that Pluto is hiding underground oceans that are liquid. The planet has a thin atmosphere that contains methane. NASA studies have shown that there are organic molecules on the surface. However, real-life on Pluto is unlikely: the planet is too cold. 6 years have passed since the last mission to the planet. Today, there have been no new reports of the launch of a spacecraft to Pluto.