About a year ago, Google released Google Camera Go, a lightweight version of its proprietary photo app. The program is designed for weak smartphones running Android Go OS.

Since then, Camera Go has added new functionality borrowed from the regular Google Camera. We look at what the application is now capable of, compare it with third-party programs and figure out how useful it is for budget devices. As a test device, I used a budget Nokia 1.4.

What Google Camera Go can do

The main features that Camera Go has are portrait mode, which blurs the background using algorithms, night mode, which improves the quality of shooting in low light conditions, HDR, which combines several shots with different exposures. And a built-in translator that can recognize text on the fly. In a regular camera from Google, there are also panoramic modes, and instead of a translator, a full-fledged Google Lens, which, in addition, can recognize objects.

The settings in Camera Go are a little more meager: you cannot save pictures in RAW, you cannot use effective compression formats, take photos with motion and change the aspect ratio.

In addition, there are no tips in the simplified application: how to position the smartphone to avoid perspective distortion, a message about the need to clean the lens.

The interface elements in the two applications look identical. All the differences lie only in the functions.

I compared images with night mode and HDR on and off, and photos were taken through the popular third-party Open Camera app.

Photos of a night street with several illuminated areas turned out to be of low quality in standard mode on Camera Go and Open Camera. Google’s Night Sight significantly changes the situation: bright places have become even more overexposed. Still, more details have appeared in the shadows, and the overall detail of the picture has increased. Most surprisingly, in night mode, the resolution is halved. Open Camera’s HDR mode did the best with highlights, but color and detail suffered.

In the second scene, the standard Camera Go, and Open Camera modes again produced similar results. But the night mode in the Google camera performed almost a miracle: the exposure increased, the shadows became much lighter, the clarity of the picture improved. Open Camera with HDR made glowing signs more readable but added color noise and soap. In my opinion, in both cases, the photos taken with Camera Go and the built-in night mode look more attractive.

YOU CAN ALSO READ:   Repair service registry is missing or corrupted in Windows 10

During the day, the situation is even more interesting: pictures on Camera Go with HDR turned off are much better than pictures with this mode. Most importantly, they are much clearer. This can be clearly seen if you zoom in on the sign on the house. But, despite the loss of all the details, HDR really “stretches” the lighting – the second shot is a little brighter. 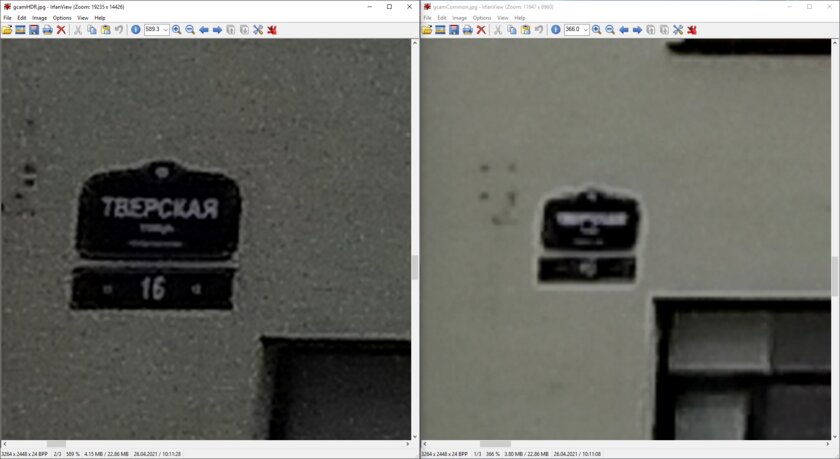 On a bright sunny day, the difference between cameras and modes is even better visible. GCam without HDR showed good detail and with HDR – deficient quality, but the image clearly highlights dark areas like grass and houses. The standard mode in OpenCamera does not differ from the standard mode in GCam, but HDR did worse here – shadows are too highlighted, even faded.

Photos without HDR are slightly darker but generally look better at the expense of detail. With all this, the result obtained using Open Camera cannot be called better or worse – there are nuances everywhere.

Bottom line: what smart algorithms are capable of

Google Camera Go is a great solution for ultra-budget smartphones. So, when shooting in night mode, you have to compromise and be content with a cut resolution. But at the same time, the lighting in the photo becomes much better, and even third-party cameras cannot give a similar result. During the day, the HDR mode is not recommended for use: without it, the pictures are darker and sharper. Of course, Google’s camera app will not bring photography closer to the level of expensive smartphones, but sometimes it gives an impressive result for a cheap camera.

Windows 11 can install Android apps and this is not emulation