In April 2019, Sony unveiled the much-anticipated Days Gone exclusive to the world, which did not have enough stars from the sky, although it performed well on sale. The audience did not appreciate the very meager optimization, the linearity of the plot, the same type of tasks, standard RPG mechanics, and the trick with the monster set “not zombies,” so, in the end, the project was deservedly called the weakest exclusive of the Japanese. And nowadays, Gone is coming to PC, and I’m sure that right now, the game will reveal itself the way it should have been originally – with the proper drama, convenience, pleasant gameplay, and the foundation for the second part. Why? I’ll explain now.

A linear story about distraught people

The storyline of Days Gone is so similar in a general setting to The Last of Us that both games would look the same when writing a short synopsis. These projects are built around the fact that a virus broke out in the United States (what happens in the rest of the world of developers, apparently, does not care much), which turned most of the population into insane creatures. Only in The Last of Us are clickers as monsters, and in Days Gone, freakers (or freaks). The main difference is that these are not zombies. The creatures you will meet and destroy are living people with a clouded psyche and not walking dead.

And the main character in this whole orgy is the usual biker, Deacon St. John, who in the opening video put his wife on a helicopter to escape from the flood of phreakers, after which she was not seen or heard. And although Deacon’s main task is to find his beloved woman, whom he has been engaged in for two years, he still has to be distracted by side assignments – otherwise, how to get supplies for the bike, get medicines or survive. It turns out a very simple-minded, sometimes poor plot, which is also linear to the point of disgrace – the developers lead you from start to finish without the ability to collapse. 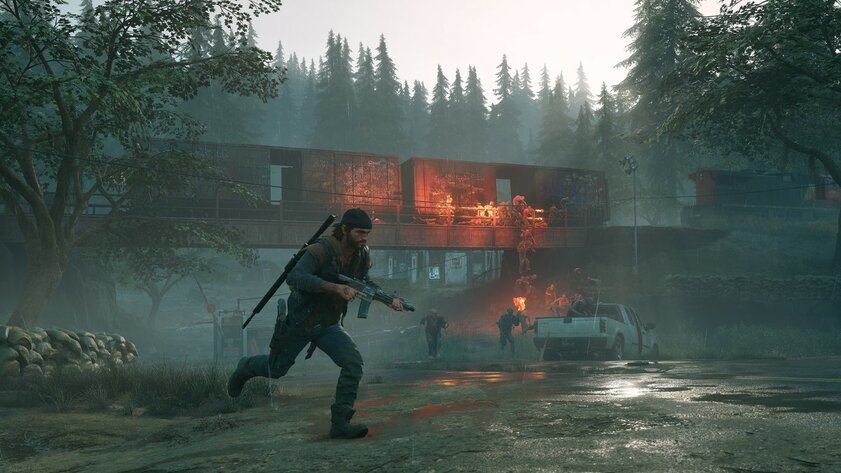 Absolutely all the main plot tasks are spelled out in advance – you cannot accept some moral choice that will affect the attitude of others to the main character. You cannot refuse a previously prepared path. Freedom is given only in side quests, which allow you to improve your equipment, acquire parts for a bike or raise the level of respect in the settlement, but the tasks themselves are boring and monotonous. And, what is saddest, there is almost no drama in the narrative, and for some reason, the scriptwriters do not want to kill secondary characters-friends to bring the player to emotions somehow. They should learn from the authors of Game of Thrones.

YOU CAN ALSO READ:   FaceTime is finally available on Android and Windows

So what’s the freak trick?

But your overall impression of the storyline will change dramatically if you have the strength and patience to reach the very end. The fact is that the authors of the project have repeatedly emphasized that phreakers are not zombies but people who have gone mad from the virus, and they did it for a reason. If initially the idea of ​​the whole “not zombie” setting seems like a banal desire to stand out from the rest of the sea of ​​projects about the walking dead, then at the end, when the developers blow up the gamer’s brain with a secret ending, everything falls into place – it immediately becomes clear why freaks are freaks, not zombies, why is it so important to the story, and the plot turns from boring to overwhelmingly cool. The problem is that the trick of the setting is revealed only at the very end, and even not everyone saw this end. 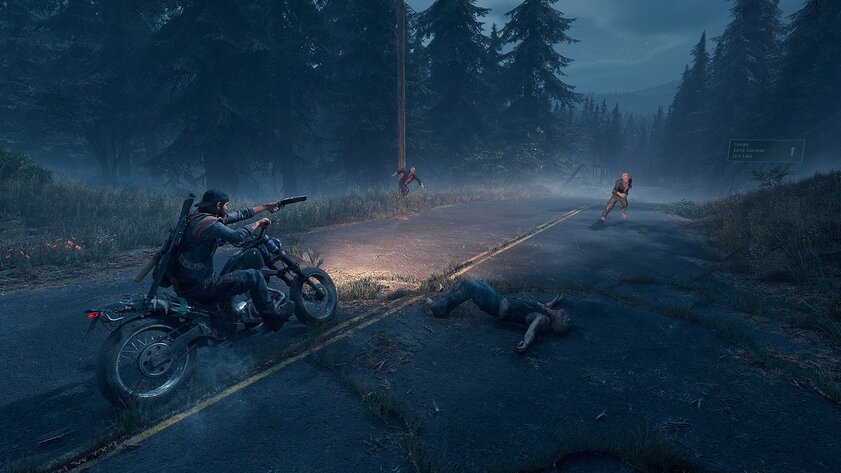 I can’t tell the details without throwing a wave of spoilers at the readers, but, believe me, in the very last cut-scene, the developers very clearly explain the peculiarity of their setting. Yes, to get to it will take about thirty hours (or sixty, if with additional tasks) fighting monsters and doing boring tasks, but the ending is worth it, no doubt about it. Moreover, thanks to such an enchanting ending to the narrative, we got a thick hint that the second part will definitely be, and, most likely, it will be a cut above in terms of drama compared to the original. After all, now everything has become extremely clear.

Nothing New or Classic Above All

There were a lot of controversies online that the game, while showing the makings of a role-playing project, did not demonstrate absolutely any new mechanics. And this is really so – the main character, as in any RPG, needs to pump his level, gaining new skills, collect resources for crafting and upgrades, pick up ammo, communicate with NPCs to receive a task, clear locations, and stuff like that. Yes, the developers have introduced a motorcycle into the gameplay, which, like real bikers, acts as a loyal companion for Deacon, a permanent vehicle. I’m not afraid of this word, a friend. It can also be improved, and in general, it is a full-fledged character in the virtual universe. 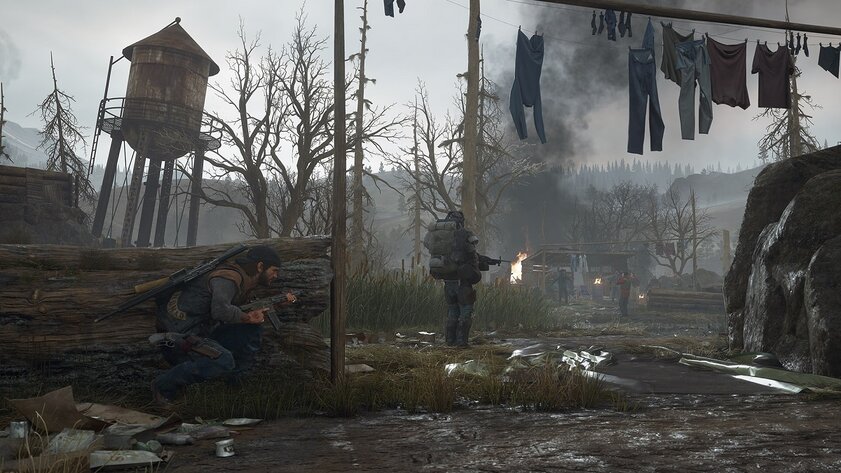 Another thing is that calling the classic RPG gameplay bad language will not turn out to be – how can you condemn the third “Witcher” for the fact that there, as in The Elder Scrolls IV: Oblivion, you need to craft potions, fight monsters and complete tasks “go and get -bring “? No, these are genre features that all RPGs are built on. Moreover, the game mechanics of Days Gone look much more appropriate and reasonable in the post-apocalypse setting than in The Division, for example, so nitpicking about the lack of innovation seems far-fetched to me personally.

YOU CAN ALSO READ:   Apple reveals how much it spent on WWDC offline

It’s more convenient on a PC

Although the developers tried to focus on the plot, world exploration, and other exciting mechanics, you still have to shoot a lot in this project. And it’s not only about hordes of freaks, with whom, in fact, there is no point in fighting (it is better to immediately jump on an iron horse and drown all the way) but also about most tasks in the spirit of “go there, clean up the location, take something valuable and bring it here, fighting off the accompanying enemies along the way. ” And although the game helps the gamer in every possible way in aiming, which is not surprising for console gaming, it will be much more convenient for most gamers to fight with a mouse in their hands. 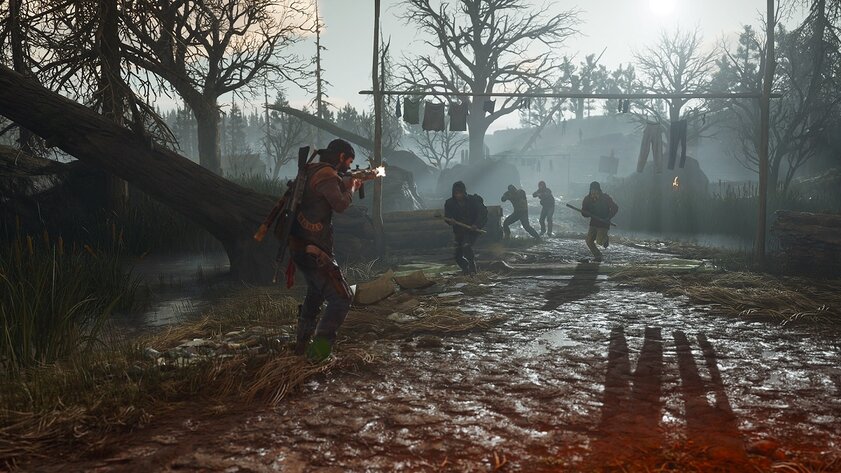 Yes, I understand perfectly well that experienced players on consoles with a gamepad in their hands can shoot very accurately. They have a good reaction, and if they have auto-homing, they can even play PC boyars, multiplayer shooters. But when it comes to the more average player who, with sad eyes, launches third-person action and then tries to shoot fast-moving targets at the heads, the mouse and keyboard still look much more attractive. And on these input devices, Days Gone can really sparkle after the pain and suffering on the controller.

Surprisingly, they optimized it.

Continuing the thought about convenience and comfort, I would like to remind you that Days Gone on the last generation of consoles worked only at 30 frames per second – and this is because the project is an action game with rich battle scenes. Naturally, playing with such a smooth picture is corny uncomfortable, and when mass carnages begin, the situation becomes even worse. Only on the PlayStation 5, the developers brought 60 FPS at dynamic 4K resolution, but on the PC, fortunately, the situation is much better. I can’t say how and why, but the developers have very decently optimized Days Gone for personal computers. 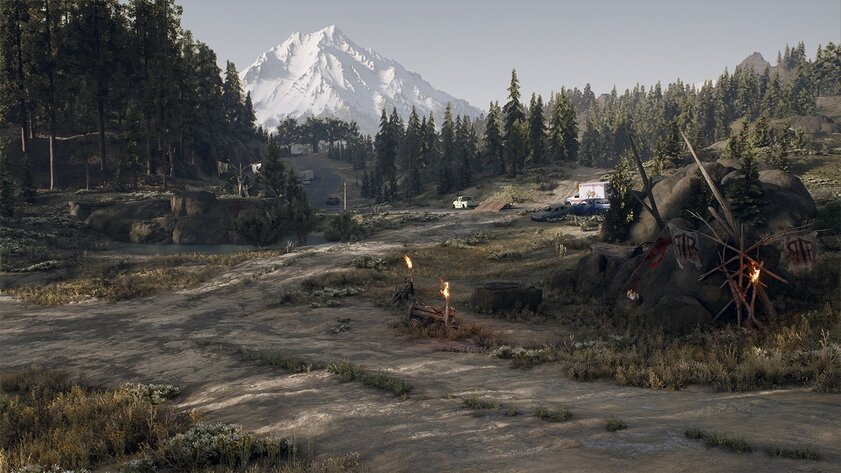 To understand the picture – at the minimum graphics settings, the game requires only an Intel Core i5-2500K, 8 GB of RAM, and a GeForce GTX 780 graphics card with 3 GB memory from the PC. Agree. For an AAA game that was released two years ago, these are very loyal system requirements. Moreover, there were enthusiasts on the network who launched Days Gone on a GTX 1030 video card with 2 GB of video memory – the game consistently demonstrates 30 frames per second, coping with the task. Of course, you will have to acquire slightly more productive hardware for complete comfort, but the overall feeling of optimizing for a PC is excellent. 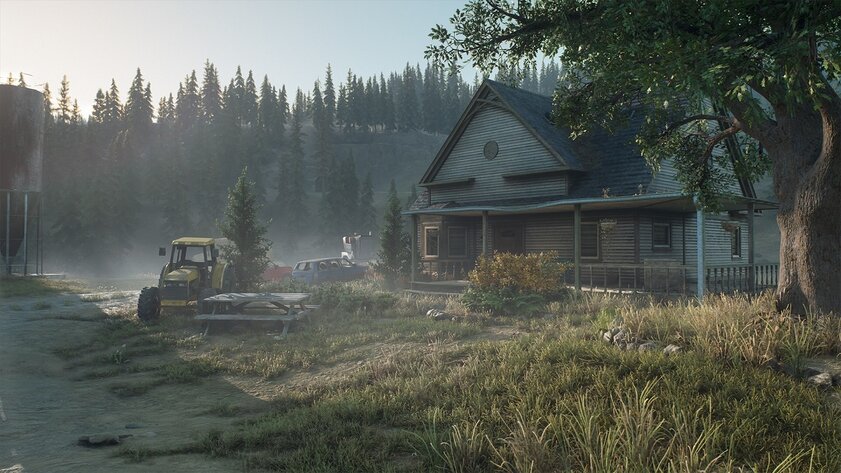 However, in addition to the stability of the frame rate, gamers on a PC will not get any big improvements – even at maximum graphics settings, a GeForce GTX 1060 is required. That is, you should not wait for ray tracing. A noticeable improvement in textures or lighting is definitely not worth it. The problem with the port of the game on the PC is that initially, Days Gone is a fairly simple graphically release, which sometimes looks beautiful and cinematic, but only sometimes. And, accordingly, transferring the game to computers, the developers did not redo textures or technologies to make the picture more beautiful.

YOU CAN ALSO READ:   Comic cryptocurrency Dogecoin grew by 14,000% and became the 4th in the world in terms of capitalization

PC – a vaccine for all (almost) problems

Let’s summarize a little – while playing on the console, I, like other gamers around the world, had certain questions about the game: it was hard to shoot at moments, I wanted more innovations in terms of gameplay, and for some, 30 frames per second in action with so many saturated scenes, it seemed not enough. Moreover, the effect of inflated expectations on the part of gamers who expected something at the level of God of War from the release also played a cruel joke. Because of this, Days Gone came out controversial at times, although it was originally planned to release the level of the legendary The Last of Us. 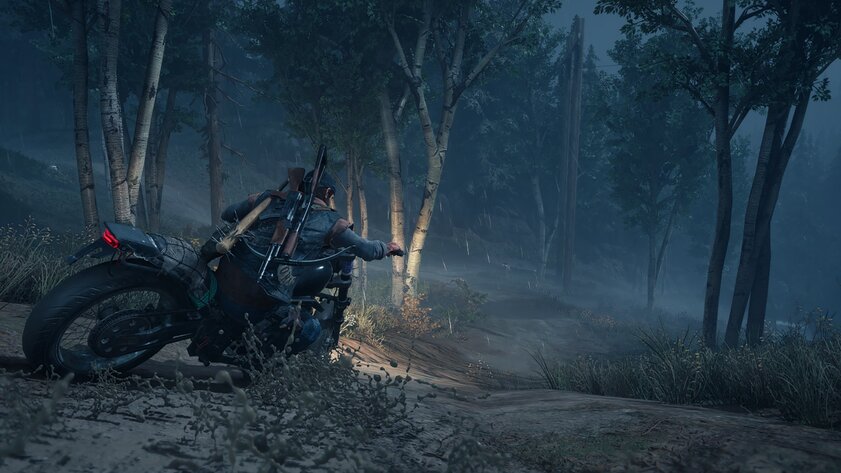 Fortunately, when it got to the PC, the release got rid of most of the problems. Shooting with the mouse and gameplay on the keyboard is extremely comfortable and enjoyable. The optimization has been tightened to such a level that you will play with high graphics settings without problems with FPS, even on weak systems. At the same time, the lack of innovation is more a far-fetched problem than a real one, and the storyline and setting with phreakers are actually very cool spelled out. You have to wait for that very scene at the helicopter in the cemetery to understand the genius of the scriptwriters’ idea. And, as it seems to me, getting to this cut-scene is definitely worth it – it makes Days Gone that very exclusive, albeit in quotes, that everyone was waiting for.

Not everyone has three Oscars. Daniel Day-Lewis is 64 years old: 6 of his masterpiece roles